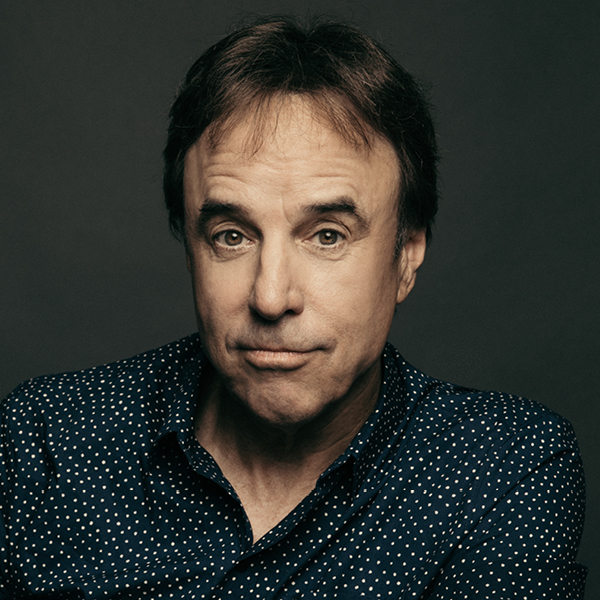 PLEASE NOTE THAT WE CAN’T GUARANTEE EVERYONE IN YOUR PARTY WILL BE SAT TOGETHER UNLESS ALL TICKETS WERE PURCHASED UNDER ONE ORDER.

IF YOUR PARTY ORDERED TICKETS SEPARATELY, PLEASE CONTACT OUR BOX OFFICE TO LET US KNOW THAT YOU'LL BE PART OF A GROUP AND WE WILL DO OUR BEST TO SEAT YOU TOGETHER.


Kevin Nealon sets himself apart from other comedic performers with his unique sense of humor, dry wit and likeable demeanor. Nealon is best known for his nine-year stint as a cast member of NBC’s Saturday Night Live, and has received critical acclaim for his role in the Showtime series, Weeds. Weeds has been honored at the 2006, 2007 and 2009 Golden Globes with nominations for “Best Television Series Comedy or Musical.” In 2007 and 2009, Weeds was nominated for the Screen Actors Guild Award for “Outstanding Performance by an Ensemble in a Comedy Series.” In the show, Nealon portrayed a stoned accountant and business advisor. Nealon’s second standup special for Showtime, “Whelmed…But Not Overly,” debuted in August, 2012.

On the big screen, Kevin starred alongside Adam Sandler and Jennifer Aniston in Just Go with It, a film about a man who enlists the help of his receptionist and her kids to land the woman of his dreams. In the film, he portrays one half of a plastic-surgery-obsessed couple. Just Go with It grossed over $30 million in its opening weekend and over $214 million worldwide. In 2010, Nealon completed work on the film And They’re Off, a comedy centered around a failed horse trainer who desperately wants to be back in the winner’s circle.

Nealon has found great comedic success in his extensive film career. In Anger Management, he played opposite Jack Nicholson and fellow Saturday Night Live comedian, Adam Sandler. He and Sandler also teamed up in Eight Crazy Nights, The Wedding Singer, Happy Gilmore and You Don’t Mess with the Zohan, the latter of which grossed over $200 million worldwide. In Joe Dirt, Nealon joined another Saturday Night Live alumnus David Spade. Kevin’s other film credits include Daddy Day Care with Eddie Murphy, Good Boy with Molly Shannon, Roxanne with Steve Martin and the cult hit Grandma’s Boy with Jonah Hill and Nick Swardson. Kevin has also stared in the adventure-comedy Aliens in the Attic opposite Tim Meadows and Ashley Tisdale. He can also be seen alongside Tom Arnold in the independent feature Remarkable Power, in which Nealon assumes the role of a late night talk show host who goes to great lengths to bring his cancelled show back on the air. Kevin provided the voice for the title role in the Nick At Nite stop-motion animated series Glenn Martin, DDS. He starred opposite Catherine O’Hara and Judy Greer in the series that followed the adventures of a traveling dentist and his family.

As one of the longest running cast members on NBC’s Saturday Night Live (1986-1995), Nealon created some of the show’s most memorable characters, including ‘The Subliminal Man’ and ‘Hans and Franz.’ Nealon’s reoccurring role as an anchor on ‘Weekend Update’ made the sketch a show staple. In 1988 Kevin earned an Emmy Award nomination as part of the SNL writing team.

A sought-afterguest star on television, Kevin has made a number of appearances on Hot In Cleveland. Franklin & Bash, Monk, Fat Actress, Curb Your

Enthusiasm and Still Standing. Nealon hosted TBS’s Funniest Commercials of the Year for the fifth time. This special highlights the most outrageous and ridiculous commercials from around the world. In 2008, Nealon released his first book, Yes, You’re Pregnant, But What About Me? - a comical look at the male perspective of pregnancy. The book is available in bookstores. Currently, Kevin resides in Los Angeles with his wife and son.


PLEASE DON'T PURCHASE TICKETS FROM ANY OTHER SITE. TICKET RESALE IS STRICTLY PROHIBITED. YOUR NAME, CREDIT CARD, ADDRESS, AND EMAIL ADDRESS WILL BE VERIFIED. TICKETS SUSPECTED OF BEING PURCHASED FOR THE SOLE PURPOSE OF RESELLING WILL BE CANCELLED AT THE DISCRETION OF THE TEMPE IMPROV.

NEED A RESERVED TABLE FOR YOUR ENTIRE PARTY? Call The Box Office And Ask How You Can Fly First Class And Upgrade To Reserved Seating!

SPECIAL OCCASION? Groups Of 20+ Are Eligible For Exclusive Food & Beverage Packages That Also Include Guaranteed Reserved Seating! For more information, click the GROUPS TAB at the top of the page!

DO NOT PURCHASE TICKETS FROM ANYONE OR ANY OTHER SITE OTHER THAN TEMPEIMPROV.COM

TICKET RESALE IS STRICTLY PROHIBITED, YOUR NAME, CREDIT CARD, ADDRESS, AND EMAIL ADDRESS WILL BE VERIFIED

Emmy and SAG-nominated actor, comedian, and author Kevin Nealon is best known for his nine-year stint as a cast member of NBC’s Saturday Night Live, and has received critical acclaim for his role in the Showtime series Weeds. Kevin most recently starred on the CBS-TV comedy series Man With A Plan, produces and hosts digital series Hiking with Kevin, and tours his stand-up globally.

Nealon’s self-produced, edited, and hosted web series Hiking with Kevin is exclusively available on his YouTube channel of the same name. In the series, Kevin interviews his A-list celebrity friends on hikes throughout the country.

Most recently, Nealon starred in CBS’s Man With a Plan during all four seasons. Kevin’s extensive television credits include Globen Globe and SAG-nominated Weeds, the titular voice role of Glenn Martin, DDS, two critically acclaimed stand-up specials for Showtime, and a number of appearances on Monk, Curb Your Enthusiasm, Still Standing and more. His extensive film career includes projects such as Anger Management, Eight Crazy Nights, The Wedding Singer, Happy Gilmore, Just Go With It, You Don’t Mess with the Zohan, Joe Dirt, Daddy Day Care, Roxanne, and Grandma’s Boy.

As one of the longest running cast members on NBC’s Saturday Night Live (1986-1995), Nealon created some of the show’s most memorable characters; his recurring role as an anchor on ‘Weekend Update’ helped make the sketch a show staple. In 1988, he earned an Emmy nomination as part of the SNL writing team.

Currently, Kevin resides in Los Angeles with his wife and son.